Fukushima Kids arrived in Cairns safely.
They were all excited because it was the first trip abroad for more than half of them. 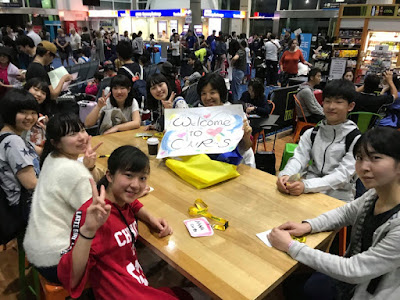 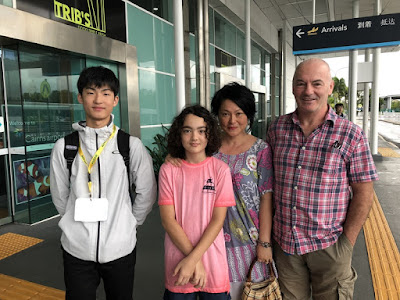 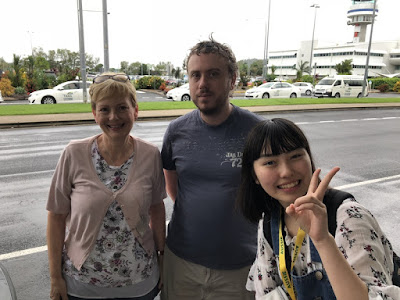 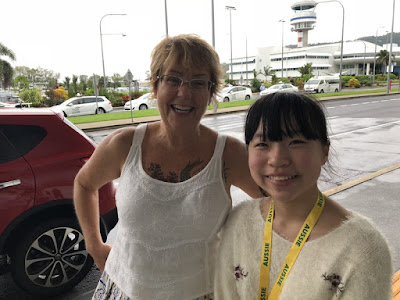 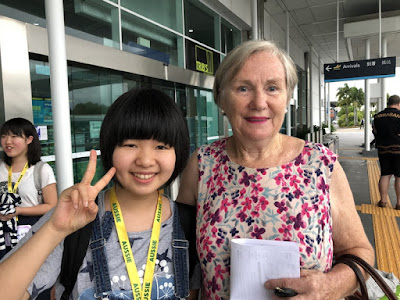 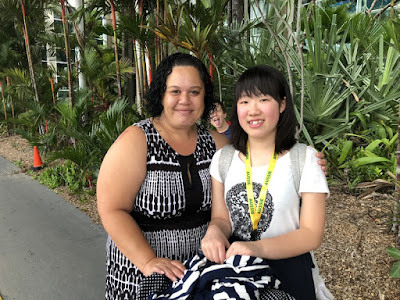 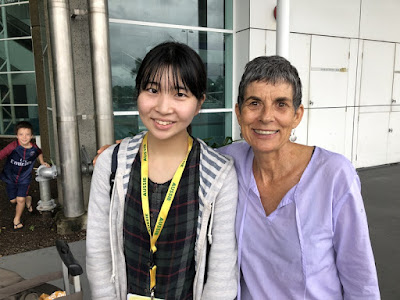 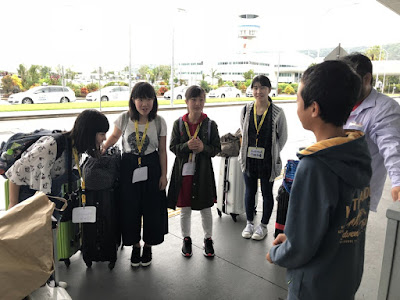 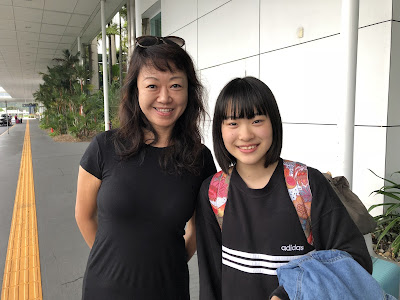 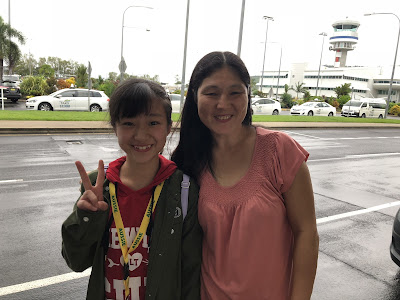 Kids were excited an also a bit nervous about their first home stay ever,
but they had a wonderful time with the host families at the end.
Please find the reports of the day below. 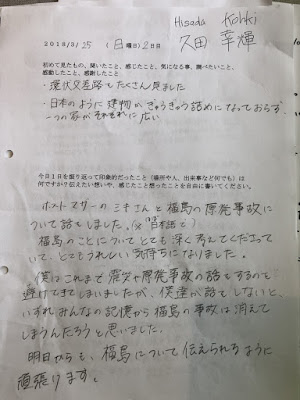 What stood out for me today?


* I saw many roundabouts on the road * It’s not like in Japan where the buildings are built close to each other; each house is spacious. Some reflections


I talked to my host mother, Miki, about Fukushima nuclear power plant accident (note: mostly in Japanese).It made me feel appreciative that she would think deeply about issues in Fukushima. Until now, I avoided talking about earthquake disaster and nuclear power plant accident. However, it made me think that if I don’t continue to talk about it, the memories of Fukushima will eventually fade away in people’s minds. I hope to be able to talk more about Fukushima from tomorrow. 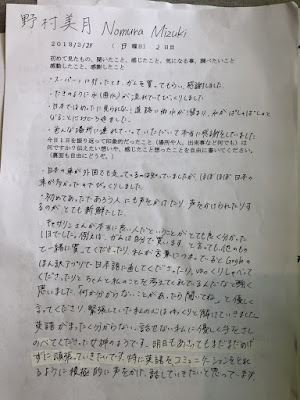 Sunday, March 25
Mizuki Nomura
What stood out for me today?
* When we went to the supermarket, my host mother bought me a chewing gum, and I was thankful * I was so surprise by how it was raining like waterfall. I saw some puddles on the road, a scenery you would not see in Japan, so I was quite surprised * I’m feeling thankful that I got to see different places Some reflections I knew that Japanese cars are sold overseas, but I was surprised how there were so many Japanese cars on the road here.It was refreshing to see how people here greet one another and do small chit chats, even if you’ve never met that person before.


Today, I really felt that Catherine is such a kind and generous person. For example, although I said I would buy things myself, she ended up buying it together with her other items. When I was stuck for words, she would use Google translator app and try to communicate in Japanese. I noticed she would speak slowly for me, and I really felt that she was considerate. She would say gently, “if you have any questions, just ask”. Eventually, she calmed my nerves. To me she felt like a goddess reaching her helping hands to someone like me who is finding it hard to listen and speak in English. Tomorrow and the coming days, I’d like to be proactive in striking up conversations and improving my English communication skills. 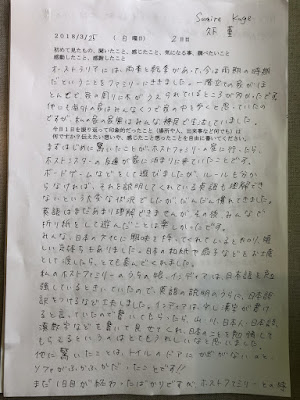 Sunday, March 25
Sumire Kuge
What stood out for me today?
* I heard that Australia (Cairns) has rainy season and dry season, and that currently we are in raining season. * I noticed most homes are single storey houses. I saw that many houses have trees planted around it. * I had an impression people walk with shoes inside their homes, but my host family were all bare feet inside the house. Some reflections Firstly, when I went to my host family’s home, I was very surprised that my host sister’s friend was over for a sleep over. We played boardgames, but I didn’t know the rules and I didn’t have enough English skills to understand the explanations, and it was quite a challenge, but eventually, I got used to it. I still don’t understand English too well, but afterwards we played with origami, which was fun. I saw that there’s an interest in Japanese culture, and this made me feel happy. I gave some gifts from Japan such as traditional Japanese paper and fans, and they were happy to receive them. I heard that my host sister, India, is studying Japanese, so I put some Japanese translations to English explanations for her. I heard that she started learning kanji, so I asked her whether she could write me some, and she could write the following words in kanji: mountain, river, Japanese person, Japanese language. It made me feel happy that there are people learning Japanese. Other things I was surprised by were the fact that there was no lock on the door to toilet and how fluffy and soft the couches were! It’s only been the first day here but I enjoyed my time with host family. 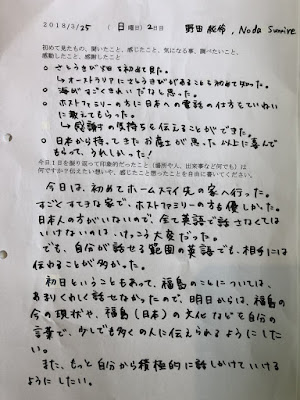 Sunday, March 25
Summer Noda
What stood out for me today?
* I saw sugar cane for the first time today -> I heard for the first time that there are sugar canes in Australia. * I thought that sea here is beautiful * My host family taught me carefully how to call my family in Japan -> to which I was able to express my thanks. * The Japanese gifts I brought from Japan were received well - much more than I imagined! Some reflections Today, I went to my host family’s house for the first time. It was a beautiful house and my host family was really kind. There is no one in the family who speaks Japanese so I had to speak everything in English, and that was hard. That said. I found that within the limits of my English capabilities, it was still possible to convey a lot of things. Being my first day there, there wasn’t much opportunity to talk about Fukushima, but I hope that from tomorrow onwards I would be able to share more about cultures of Fukushima and Japan with my own words. Also, I’d like to be more proactive in starting a conversation with people. 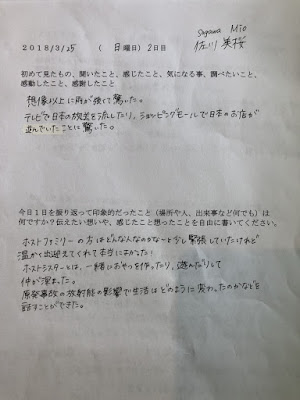 What stood out for me today? I was surprised by how rain was much stronger than I expected. I was surprised to see Japanese television program on TV, and seeing Japanese shops in the shopping mall. Some reflections I was wondering what my host family was going to be like, and I was slightly nervous about it, but they welcomed me warmly, which was great! I got to make some sweets with my host sister, and I played with her, which made us feel closer together. I was able to talk to them about how my life has changed due to influence of radiation concerns following the nuclear power plant accident. 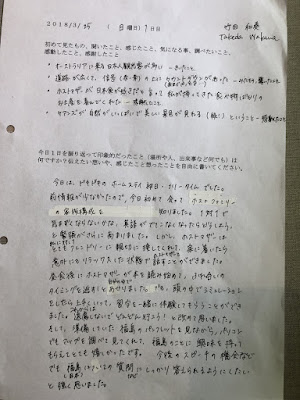 
Wakana Takeda
What stood out for me today?
* I head that there are many Japanese tourists that come to Australia * The roads are wide. The traffic lights (red and green) has a countdown lights for pedestrians flickering in red * My host mother likes Japanese food, and she was really glad to receive some food I brought from Japan * The natural environment in Cairns is abundant, and there are beautiful sceneries (green!) Some reflections Today was the first day of homestay with free time with host family. I didn’t have much information before, so today I found out about the host family (how many, who is who etc). I was concerned about whether it would be awkward one on one, or whether I found myself not speaking English well, and I felt nervous. However, my host mother was really friendly and sincere. When we reached home, it was quite relaxing and I was able to talk to her okay. After lunch, my host mother started reading a book, and for a moment I got a bit worried that I would miss opportunities for interaction. But when I did a simulation in my head, it turned out quite well and I was able to get her to experience Japanese calligraphy. This gave me confidence that I shouldn’t be hesitant; I should just give it a go! And together, we looked at a pamphlet about Fukushima that she had prepared, and we looked at a map online. I was happy that she took interest in Fukushima. For speech opportunities in the future, I thought that I would like to be able to respond to questions about Fukushima and Japan. 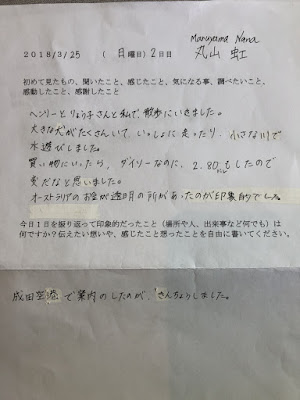 Day 2 Nana Maruyama I went for a walk host family Ryoko & Henry. I saw many of big dogs and ran together and played in a creek with them. On shopping, I found "Daiso" (famous Japanese dollar store) and they sold everything in $2.80 which supposed to be only $1 in Japan. I was impressed that Australian dollar notes have a part of transparent. I was a bit nervous to talk in English to people from abroad in Narita Airport. 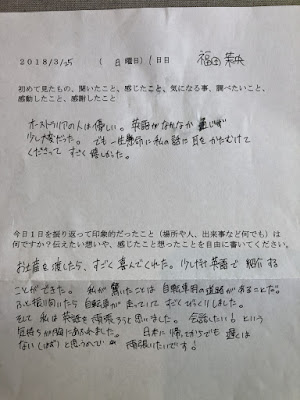 Aussie People are gentle. I struggled a bit with speaking English. However, they tried to listen to me patiently. I was very happy. When I gave the souvenir from Japan, they were so delighted. I succeeded to explain a little bit in English. The thing I was surprised was there is a bicycle lane on the road. When I looked back in a car, I saw a bike rider just behind and it was surprising. I would like to do my best improving my English. I want to have more conversations! It should not be too late even after I go back to Japan, I will study English!

Please refer the album below for the Day2.
https://www.facebook.com/pg/smilewithkids/photos/?tab=album&album_id=1701747526579517
We will upload the movies of their interviews via facebook later, what they are thinking now and what they want to do in Cairns.

Thank you very much.

Tuesday 27 March, from 15:30 @Tarzan Café
We will have a talking session.
Everybody welcome!